From Mic.com/Music comes a list you need to bookmark on your browser.

Forget Spotify and Pandora — the Internet is too creative and fun a place to waste your time with straight streaming services.

It’s time to tune in to music sites that go beyond just listening. Because the Internet is big, and the ways we engage with music are even bigger. These creative sites will help you learn new genres, craft your own Daft Punk track, play drums with your keyboard and write your own blues song. They’ll soundtrack your Wikipedia searching and help you forget songs you hate.

One disclaimer, though: Some sites (if not all) are extremely addicting and hard to step away from. Click at your own risk.

Have Taylor Swift stuck in your head? Get her out and replace “Shake It Off” with something equally catchy. That’s the idea behind Unhearit, and nothing is simpler than replacing one earworm with another.

Claiming that it uses the “latest in reverse-auditory-melodic-unstickification technology,” Unhearit isn’t necessarily revolutionizing anything. But it’s surprisingly effective.

Beat Lab is a grid-based beatmaker, and it’s simple enough for anyone to use. Users can upload and expand upon their sounds, choosing from a range of styles and speeds including ‘OMG,’ the fastest one. The Beat Lab community is strongly social with extremely active communities around the leaderboard and exploration tabs. Users can also load tracks from the community if they find they’ve run out of ideas.

Warning: If you tend to type fast, this could be dangerous for your eyes. Patatap is a shape-sound sampler, synthesizing different beats with geometric patterns based on what key you press. It’s perfectly abstract and highly addicting. This is also the closest you’ll probably ever come to being a synesthete.

NPR Music, the powerhouse behind Tiny Desk concerts and All Songs Considered, goes “off the beaten path” for their showcase of Field Recordings. These videos place artists into quirky and unique scenes — for example, there’s one featuring a percussion quartet that performs under the Manhattan Bridge and another about a harpist who plays in a taxidermy shop.

Whatever the backdrop, this collection offers a fun and visual way of discovering new genres alongside unfamiliar corners of the world.

There are over 4 million songs that have never been played on Spotify. Forgotify wants that to change.

The site is basically a database that combs through Spotify’s API, choosing tracks that have a play count of zero. Of course, it’s expected that Forgotify will be an eclectic mix, but part of the excitement is never knowing what’s next to be found.

Pulling from over 800 hand-picked blogs, Hype Machine is a music blog aggregator centered on discovery. All tracks are compiled in one spot for easy listening, and the selection is wide. Genre tags range from “nu-disco” to “glo-fi.” It’s a great site for uncovering new and trending remixes, and its indie coverage continues to flourish: Each week, the team features an advance stream of an upcoming indie release.

Check out the whimsical yearly zeitgeist or “spy” on what other what others are listening to at any given moment.

Gnoosic‘s goal is clear and simple: To inform you of what you didn’t know you liked. The Gnod engine is a “self-adapting system” that talks to everything that comes its way — basically, it’s a record of what everyone likes and dislikes based on previous searches.

Type in your three favorite bands or artists and Gnoosic pulls up slew of other acts to check out. It’s like Pandora minus the noise; there are even similar engines dedicated to books, movies and art.

An offspring of Illinois-based recording studio Horsetrack, Daytrotter hosts live sessions with both popular indie bands and up-and-comers. The archive is extensive (Vampire Weekend, Death Cab for Cutie, Haim,Iron & Wine) and the site is beautifully designed, filled with only hand-drawn and painted portraits done by in-house artists.

“What Daytrotter is attempting to do is to not kid around with you and tell you that we found something that you never knew existed,” they wrote on their Facebook. “We are going to contribute to the musical landscape, not just toss it around like a used book or a stolen pickup line.” 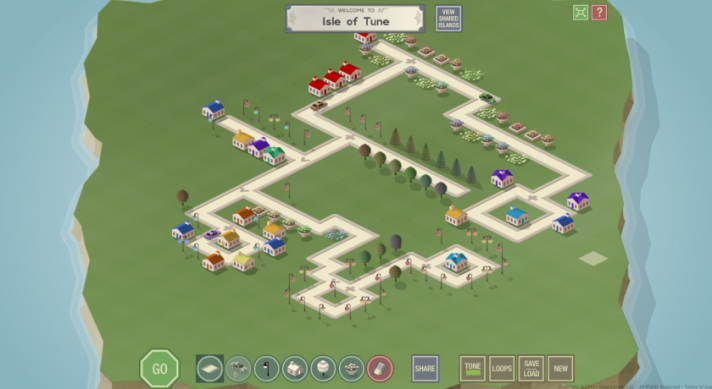 Via: Isle of Tune

Imagine if SimCity turned musical. On Isle of Tune, that imagination is reality. You can position cars so that they drive down street layouts, playing melodies as they pass houses, plants, trees and light poles. Once they’ve been placed, click on the different elements to change the sound, tone, delay or volume.

“Islands” can also be saved and shared; there’s a popular island this week called “Shut Up, Dogs.”

Since many of us may never refine our beatboxing skills, Incredibox fills the void. With three versions to choose from, a cappella becomes a personal and creative digital experience. And there are endless combinations — just check out the hundreds of shared creations on YouTube alone.

Kanye’s unpredictable. So is this game.

The only reason to stop playing Kanye Zone is because you’re tired of repeatedly hearing the line “Don’t let me in to my zone” from “N****s in Paris.”

But even that won’t stop you. It’s all about getting cash, getting Kanyes, beating everyone else, and not wanting Jay Z to enter if you lose. Creators Michael Frederickson (who works at Pixar) and Stephen Barlow were inspired by ’70s and ’80s-style video games, like Pac-Man and Pong, and even went on to create another interactive earworm experience, Pitbull Party.

Who would have thought Wikipedia would sound this good? Listen to Wikipedia turns the site’s recent changes feed into music, with each mellow note representing a new change. Bell sounds signal additions to a page, while plucks signal removals. Listen closely, though, because the pitch is deeper if the edit is larger. Never quite following the same pattern, it’s a fascinating marriage of real-time edits and meditative melodies.

The about section of Seaquence is confusing, to say the least: “Adopting a biological metaphor, you can create and combine musical life forms resulting in an organic, dynamic composition.”

If that sounds like nonsense, try the app and you’ll get it immediately. Once you start messing around within Seaquence, you’re hooked. Twist the pitch, adjust the grid, play with placement; the “biology” is endless.

Via: Every Noise At Once

Have you ever pretended like you totally knew what “freak folk” was? So have many others (also, just for future reference). That’s where Every Noise at Once comes in handy. It’s a scatter-plot map based on an algorithm of over 1,270 music genres. Some are more obscure than others, like “contemporary post-bop” or “gothic symphonic metal.” Click on a genre to get a sense of what it sounds like; click again and the map pulls out a list of related artists and bands.

Define “work.” Whatever that may be, GetWorkDone is a site that will pump you up to finish it. All tracks and mixes are pulled from Soundcloud, and there are two speeds: fast and faster. Be aware of how often you press faster, though — things could get really intense.

16. Interactive Music Video for Bob Dylan’s “Like a Rolling Stone”

What do Danny Brown, a TV history channel and Drew Carey have in common? The answer: a classic Bob Dylan track, of course. Set to “Like a Rolling Stone,” this brilliant interactive video allows you to flip through 16 channels of simulated television — a seamless lip-synched mashup that never grows old.

It was hailed as “Video of the Year” by TIME and earned a handful of awards, including a Webby for Best Video Editing. Interlude, the production masterminds behind it all, is known for its innovative and engaging videos. In fact, its most recent video for Brit-pop band Rixton’s “Wait On Me” mimics something like the structure of the Goosebumps “choose your own adventure” series.

It starts with a scratch — and this interactive game called Record Tripping is full of them. Scroll your way through five chapters of rotating mechanics (barrels, safes, windmills) to a narration of Alice in Wonderland, uniquely “scratched” up and enhanced by the sounds of Beck, Gorillaz and Spoon. But make sure you’re equipped with a mouse that has a scroll wheel: This trip gets trickier on a trackpad.

If you’re feeling blue, then Blues Maker is the site for you. Select simple blues lyrics (choices include “I lost my little girl,” or “I lost my sweet home, too”) with accompanying harmonica lines to create a uniquely melancholy tune. A separate page loads with your final creation, sung by a raspy (and seemingly anonymous) male voice. Foot stomping optional.

These Cover Stories are time-sucks because each scroll divulges a new surprise. In order to accommodate long-form artist interviews and profiles, Pitchfork designed Cover Stories as an interactive way to engage readers and maintain digital attention.

“We’re trying to build something that feels like you’re a little more invested in the story,” Pitchfork creative director Michael Renaud said in a 2013 interview. “Most people are fully on board with consuming their media exclusively through digital means, which I think makes a ‘print feel’ even more special: like it’s a luxury.”

Make sure to check out the rainbow dream-world of MGMT or the recent conversation with Aphex Twin, where you’re even invited to take a picture of yourself.

Audiotool is a free music production tool that allows users to create, mix and share music in any browser. It’s easy to sift through hands-on tutorials about constructing simple bass lines or to sample from 250,000 other tracks through Audiotool’s “community fed cloud.” The site design is clean in its collection of everything from synthesizers to stomp boxes, making it an enjoyable drag-and-drop music experience. For an even simpler play, check out Audiotool’s ToneMatrix, a 16×16 grid that creates basic sequences by turning squares on and off.

AudioSauna is an in-browser workstation similar to Audiotool. Audio Sauna‘s straight-forward interface makes music-making approachable, but its clearly geared more towards those with a stronger background in production. The FM-synthesizer brings a classic ’80s sound to tracks (based on the Yamaha DX21), while the Advanced Sampler offers Ping-Pong looping, low-pass and high-pass filters and over 40 presets.

iDaft will never, ever get old if you’re a Daft Punk fan. Choose between “Harder Better Faster Stronger” or “Technologic” — more options coming soon — and let the words take over in whatever order you want them to. But if you decide to play the backing beat, chances are iDaft becomes a game of trying to remember the original word placements. Still, it’s addicting.

So you’ve always wanted to play drums and to look super cool doing it? Well, that dream can become virtual reality. Ron Winter’s online drums is as simple as QWERTY; the bright colors and flashing images make for a time-sink, too.

Katie is a recent graduate from The College of William & Mary. Her writing has appeared on NPR Music, Thought Catalog and AnimalPlanet.com, and she currently works as a digital video programmer. She lives in Brooklyn with her cat, Truman.